You are here: Home / Company News / Sony Talks A Little About Their Add-On Glass Prototype 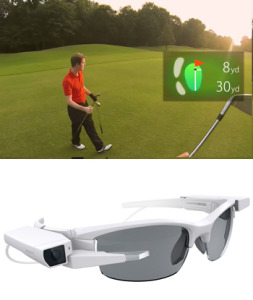 Sony is working on a prototype of a visor that clips onto an existing pair of eyeglasses.

The working name for the module is “SmartEyeglasses Attach!” (the exclamation point and InterCap are theirs), and they’ll unveil it at CES next month. It weighs 40 grams, and uses a 640×400 pixel OLED display that’s light-piped to an optical unit that sits in front of the glasses. In practice, it looks more like Google Glass and less like an Epson or Vuzix unit. It uses an ARM Cortex A7 processor, carries a 400 mAh battery, and uses Bluetooth 3.0 (note: not Bluetooth 4) and b/g/n WiFi.

Sony describes use cases for the device in sports (where the user is likely to be wearing sunglasses, which the module’s image can be projected on), a heads-up display for an action camera, or for factory floor use.

The company will provide an SDK, it says, and hopes to begin building the SmartEyeglasses Attach! next year.

Sony may be staging something of a resurgence in new tech. Its Smartwatch 3 has gotten good reviews, although it doesn’t seem to have much distribution in the United States, and a “paper watch” from a skunkworks recently got a lot of notice, too.