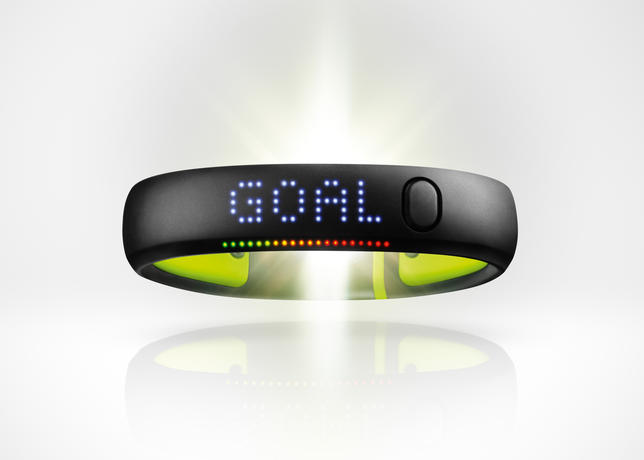 Nike on Tuesday revealed the Fuelband SE, a refresh to the original Fuelband. They’re taking orders now for release on November 6.
From the looks of it, most of the changes are in software — a slightly updated look, closer tracking of training and intense exercise intervals, and tweaks to the social aspects. The SE hardware now uses Bluetooth 4.0, to update the iOS app constantly rather than with a button-push. And they’re ditching the “ice” color scheme in favor of black with accents in red, orange, and pink. It costs $149.

The Fitbit refresh, which we wrote about last week, is more substantial. The new Fitbit Force — $129 — has an altimeter to track climbs, an actuator button to change modes, and an OLED screen that will display a clock.

I’ve been wearing a Fuelband for more than a year, and a Fitbit Flex for a couple of months. From their descriptions, it sounds like the Fuelband SE is meant to catch up with the Flex — the intensity features, the Bluetooth 4.0. The Force adds the watch, which is surprisingly key to the Fuelband experience. But the Fitbit software is still the better experience, designed as it is to be a complete fitness and diet hub.

I’ll have more to write about that. But look at it this way: I won’t upgrade my Fuelband, despite having it for well over a year. I’m thinking seriously about spending money on the Force, even though the Flex is only a couple of months old.